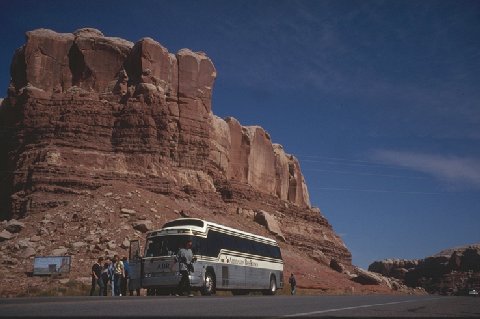 From Big Apple to Golden Gate

Our classic Coast to Coast Tour.

6000 Miles on the road, between World Trade Center and untouched nature.

Accommodations: One night at hotel in Washington, DC, two nights at hotel in San Francisco, otherwise at camping sites or in sleeper bus.

Meals: For your meals you should expect to spend approx. $20 per day 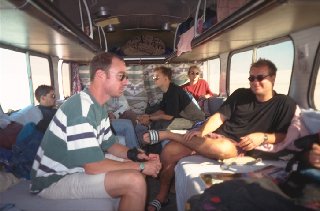 You already know that the USA is an enormous country, but have you really discovered it yet? Sit back with us and cross the country from coast to coast... from the biggest cities to the great outdoors. From the east coast to the west coast there are over 3,000 miles to cover. We'll see over double that! We came up with a host of innovative ideas to pass those long miles in the most comfortable way possible -- and still see and discover as much as possible!! From huge national parks to luxury high-rises, we'll give you an overview of America which you just can't get from a typical scheduled tour! We don't just stick to the beaten track; instead, we head through narrow side streets and lonely valleys to discover what this country is really made of!

With your comfort in mind, we've completely redesigned the interiors of our buses. Behind the 16 regular seats in front, there is a sofa-type rest area. Some nights, we'll even convert the aisle into an extended sleeping area. This will certainly make the going much more enjoyable as you snooze comfortably on the way to our next destination.

Along the way, we're going to be organizing our own cookouts. From breakfast to dinner, there will be tables full of fruits and vegetables, steaks and salads...anything our hearts desire! Needless to say, we're fully equipped for these outdoor extravaganzas (utensils, tables, benches, etc.). We're convinced by our past trips that this is the only way to go. Not only is it fun and healthy preparing and eating our own food, it sure beats the fast-food horrors waiting for us on the highway!

Where will we sleep? Mainly in spacious campgrounds across the country. We'll be pitching our tents in the best sites the US has to offer. In cities like San Francisco and Washington, D.C., we've made reservations in well-rated hotels right in the center of town. Enough details....let's go!!!

We start our odyssey in the New York. New York continues to be the biggest and most varied city in the US -- or, for that matter, the world! The famous names and landmarks roll off the tongue...Times Square, Wall Street, Central Park, Rockefeller Center, The Empire State Building, The World Trade Center, Greenwich Village, the list goes on and on. Here, we'll get acquainted with our travel companions, many of whom will have just arrived from Europe.

Our next stop is a only 300 miles from the turbulent, non-stop street life of New York, but it may as well be ten thousand. Washington, DC has more the atmosphere of a big park than a bombastic metropolis. The finely manicured lawns of the White House are not far from the stately Smithsonian Institute or columned Capitol Hill. Although Washington may seem like a sleepy, if overgrown, small town, the university section of Georgetown will get things hopping after dark with its selection of clubs and restaurants.

From DC, we move through the Appalachian Mountains and on to our next destination, Chicago. Chicago is a bustling city with a variety of noteworthy sights. The world's tallest building, the Sears Tower, and some of the nation's most famous blues bars are found in the energetic downtown district. After a long evening of dancing and bar-hopping, we'll board the bus and continue west during the night until we reach the banks of the Mississippi River. We'll stop here to prepare a massive outdoor breakfast before heading westward toward another famous river, the Missouri. On its banks we'll prepare a huge dinner.

The next day we go still further west until we reach the Great Plains where sorrowful and heroic chapters of US history were written, chapters such as Custer's Last Stand and Massacre at Wounded Knee. Today there are great Indian reservations and vast nature parks studding this landscape.

After arriving in the Badlands, the Heart of the Wild West, we'll have plenty of time to explore the traditional way of life of the Plains Indians of this region. The Badlands is a huge area having more in common with the surface of the moon than with the middle of North America. Over the past century, millions of prehistoric artifacts have been found in this desolate landscape. You'll soon realize that there's a lot more to life than meets the eye. That evening, at the Longhorn Saloon, the most adventuresome and only bar in 40 miles, we'll sink even deeper into the impressions of a by-gone era.

Not far up the trail, we'll arrive at the Wild West of Rapid City in the Black Hills of South Dakota. The Black Hills are home to the most famous mountain in the America, Mount Rushmore. Its known for the four presidents heads carved into the granite face. What you didn't know is that the original plan was to immortalize four heroes of the West -- until the sculptor couldn't find the grants for it.

The next day, yet another dimension of America awaits us: the Rocky Mountains and two of the most beautiful nature reserves in the US. The beauty and magnificence of Yellowstone and Grand Teton National Parks can hardly be described. Take a good, long look at how the earth looked before man came and poured concrete and steel. After our first glance at the natural beauty of these parks, we'll want to stay a few days. We'll pass through noisy, water-spewing geysers, walk through the Grand Canyon of Yellowstone, that gave its name to the park. We'll probably meet a few bears, bison, coyotes, and deer along the way. At the foot of the Grand Tetons, we can bathe in the hot springs! As a final good-bye to these marvelous parks, you may decide to raft down the white water rapids of the Snake River.

Next we head south through Salt Lake City and then up to Bryce Canyon. Unbelievable stalagmites of red sandstone stand like glowing fingers pointing toward the sky. Walking through this heavenly canyon, you'll be fascinated by the never-ending changes of light.

Our next stop is in yet another fairy-tale setting, Zion National Park. We hike along the ever narrower ridge up to Angel's Landing, climbing higher and higher until its only a few yards wide and the mountain drops off on one side almost vertically and on the other absolutely vertically. Stop and take a good look down...but carefully! The sheer drop is almost 3,000 feet! 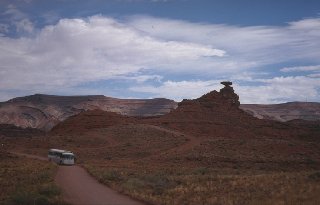 Our next stop on the way to Arizona will be Monument Valley and its unforgettable sunsets. Here, you'll probably want to shoot a few rolls of film just to show your friends back home what it's like to live in a Western. We're in the middle of the Navajo Indian Reservation. A little further and we come to the place everyone has been waiting for ... the Grand Canyon.

It would be impossible even to attempt to list all the natural marvels to be found in this mammoth garden of the Gods. In fact, we'll probably want to spend more than a few days just getting accustomed to it! It's hard to believe that one "small" river formed this colossal chasm! The stunning wonders before our eyes change hourly with the slightest movement of the sun. At Grand Canyon, we'll climb up the South Kaibab Trail, down to the Colorado River, and, next morning, up the Bright Angel Trail. If you've the nerve for it, you can even fly over the Canyon in small planes. An experience you won't easily forget!!!!

Our next point is Flagstaff where we hit that legendary Route 66, the road John Steinbeck made immortal in The Grapes of Wrath. But we'll get to breakfast on Lake Mojave, little more than a part of the mighty Colorado. After fortifying ourselves, we'll take a trip down the river on small motor boats and maybe take a dip in the ice-cold water.

In the evening sun, we'll visit the imposing Hoover Dam. Walking along the edge of the mammoth dam, you may start wondering who in the world needs all this energy??? The answer lies just down the road....Route 66 leads us to the ultimate man-made mirage of the Nevada desert: Las Vegas, a shining, titillating world of gambling and glamour. Like a brilliant stone in the middle of a calm lake, Las Vegas stands out like no other city. How many people came here to try to fulfill their dreams only to leave penniless?? Dreams materialize and vanish like the neon light. Let's just hope that we don't come back poorer to the bus than when we left it. At any rate, we'll spend the night traveling across the Mojave Desert, leaving all the glitter behind.

We hit the Pacific at Los Angeles, and naturally jump right in. Sunny California, with its sandy beaches, endless summers, and Disneyland. The following night is our last night in the coach. We take one of the most exciting roadways in the world, Highway No. 1, to that great American city, San Francisco. For the last three days of this long trip, we'll explore this beautiful, charming city built on forty hills. From the Alexander Inn, our friendly hotel right near Union Square, we can explore the city by foot or by the famous San Francisco cable cars. We can take our own sweet time doing it, too.

It's here that we end this incredible journey -- our minds filled with wonderful impressions and our telephone pads filled with new telephone numbers of friends from America, Europe, and the world. Come along and join us!!!!!

Back to the tour site

Back to ABeR - home-page