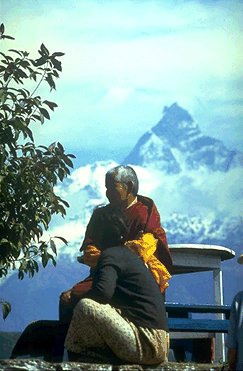 Meals: For your meals you should expect to spend approx. $10 per day

Visa: A tourist visa for US-citizens is required for Nepal. It can be obtained at the Nepalese Mission to the U.N.

Vaccinations: We strongly advise you to get smallpox and cholera vaccinations

Attention: We even organize special trekking-tours to Nepal and Tibet.

A trip for adventurers, who don't mind carrying their rucksack themselves, for people who are ready to trust the country's transportation and don't shy away from contact with the natives. A trip for people who are interested in the culture of the country and are eager to hike in the uniquely beautiful mountain world and who have no fear of wild animals - as long as they are far enough away.

With this three week Nepal trip we offer a unique mix of cultural and natural life. We will visit sight-seeing attractions in Kathmandu and the Kathmandu Valley, stretch our legs in the sun in Pokhara on Lake Phewa, hike for six days in the mountain world of the Annapurna Massif and roam through the jungle in the Royal Chitawan National Park. We will follow the track of the rhinoceros, observe crocodiles on the river, see elk and wild pigs and, with luck, even a tiger drive.

We will fly from Frankfurt via New Delhi to Kathmandu. Five days are planned for the stay in Kathmandu, sight-seeing in the old city and in the Kathmandu Valley. Plenty of time to get a glimpse of the culture and to marvel at some of the major attractions. We will see the medieval city center with its temple and palace district, the two other royal cities in the valley, Patan and Bhadgaon, and visit the most significant Buddhist and Hindu shrines and places of pilgrimage.

The culturally inspired will have a chance to visit Dakshinkali, a holy place for pilgrims 12 miles south of Kathmandu. Here, in one of the temples consecrated to the goddess Kali, goats and chickens are sacrificed on Tuesday and Saturday mornings (a bloody business that not everyone will want to see). Both Buddhanilkanta, with its shrine of the tranquil Vishnu and Kirtipur, a village southwest of Kathmandu, are worth a visit.

The less culturally inclined will find plenty of amusement: they can stroll down old back streets, walk through the markets, rummage around in clothing, jewelry and souvenir shops, chat with world travelers in one of the traveler cafes or simply watch the colorful bustle in the medieval city center.

After our stay in Kathmandu, we will ride by bus 120 miles to Pokhara on Lake Phewa, take a day to get our bearings and take off the following day for the six-day trek in the Annapurna Massif. The trek takes us up to an elevation of 10,500 feet. We will pass forests, waterfalls, medieval mountain villages, wander through misty and primeval forest, cross over hanging bridges and walk along the snow line. Fantastically beautiful panoramas of the ice and snow-covered Himalayan range open up before us.

After another day of relaxing in Pokhara, we will drive to Chitawan National Park. We will have to negotiate the last four miles on foot and ford a river. With luck, some of the locals will help us across in a canoe. We will stay in a simple lodge, in a small settlement on the eastern edge of the National Park and start on a half day trek in the jungle from here. Led by an experienced guide, we will roam through the jungle and observe rhinos, elk and other wild animals. During the hike, it is sometimes necessary to climb trees in order to observe the rhinos from a safe distance. The wild animals can be watched more comfortably from an observation tower on the edge of a field of elephant grass. This jungle hike is a thrilling affair, not for timid souls. 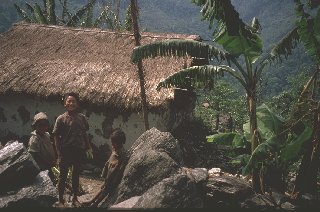 A jeep excursion is also planned which, among other things, will take us to a crocodile breeding farm. During the trip we will also see rhinos, elk, buffalo, wild pigs, wild crocodiles and many different kinds of birds. In addition to this, we offer a canoe trip downstream through the jungle for an hour, followed by a two hour hike back.

From Chitawan, we will make our way back to Kathmandu. The last day is open and may be used for shopping and the like. This combined cultural, hiking and adventure trip was intended for groups no larger than 10 people. This number of participants makes excursions and group decisions easier. On demand, changes in the program are possible. For example, we could take the entire Jomoson trek and fly from Jomoson back to Pokhara (this flight is not included in our price).

As we mentioned at the outset, this is not a leisure vacation. The tour includes strenuous phases. But these are exertions that are well worth it. By our standards, riding with the usual means of transportation in Nepal cannot be called comfortable. Sometimes travelers prefer to sit in the luggage rack on the roof of the bus. Accommodations on the trek and in Chitawan National Park are simple but passable.

Like we said, we want to travel through the country the same way the natives do.


To the tour dates

Back to the tour site

Back to ABeR - home-page